I cut up an old skirt, hemmed the pieces by hand, and made a bunch of washcloths, which have been handy to have around.

I'm eagering awaiting garbage day, since there is a dead squirrel in our trash.  It died of natural causes.

Blackberries are done now, but we still have mulberries.

We have ripe mulberries and blackberries, and yesterday I got out into the farther reaches of the blackberry jungle, and picked enough berries to make two pints of jam.

I almost didn't make the jam, but it seemed like a good thing for the children to see where jam comes from.  It turned out very well, and we used some of it to make blackberry lemonade.

I took the last of the spray paint and primer that I had been using in our previous house to repaint the toilet seat, and used it to paint a dead bush in the yard.

The paint makes the bush look silver, not white.  It's in a very dry part of the yard, so if we replaced it with something living, we would have to water it frequently.

In other news, I added a possible correction to the second post before this one, here.  There is a lot that we still don't know.

Email ThisBlogThis!Share to TwitterShare to FacebookShare to Pinterest
Labels: history, paint, truth, using what you have, yard

My family is working on a variety of woodworking and other projects.  I've been in a decluttering phase and haven't been making much myself, although I did use a little free time to play around with tatting.

I tried once or twice to learn tatting with a shuttle, but didn't get very far with it.  Then some years ago I heard about needle tatting, but I never actually tried it until now.

I was following my needlework book's instructions for shuttle tatting, though, and didn't know about forming the stitches on the needle itself until I looked up this comparison of the two methods.

One attraction of tatting is that it produces a very sturdy lace, because every stitch is a knot.

The thing that makes it somewhat hard to learn is that the path that the thread needs to take to make a half-stitch is not the same as it takes in the finished stitch (except topologically, if you want to bring mathematics into it), because it needs to be pulled to "flip" the knot to the other thread, as they say in the link. 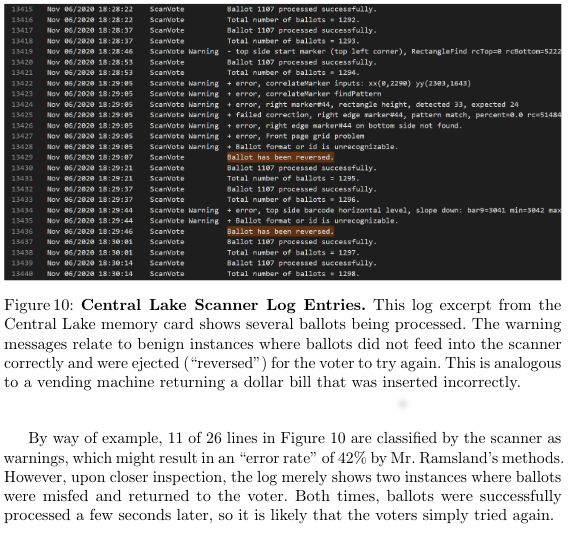 The above is from the "Analysis of the Antrim County, Michigan November 2020 Election Incident" report by J. Alex Halderman, a computer science professor at the University of Michigan with an interest in election security.

He was asked by the Secretary of State to analyze the Antrim County election to explain the errors and discrepancies.  He found over twenty, some of which are still not fully resolved.  The reader is referred to the full report for the amusing details; it is practically a textbook for how to mess with an election without getting prosecuted for election fraud.

The caption and the following text in the image above are, however, inaccurate in and of themselves.  The log file excerpt does not show "several ballots being processed."

It shows a single ballot being processed several times.

"Ballot 1107" is the ID of a distinct ballot, as Halderman must very well know from digging through the log file.  Notice the error messages that say "Ballot format or id is unrecognizable"; each ballot has a serial number on it that the scanner tries to read in.

The Dominion software is perfectly happy to read and count Ballot 1107 repeatedly, and only complains when it is shoved into the machine crooked.

And when the ballot was reversed here, it was not "returned to the voter", but to an election worker--look at the time stamps.

Halderman even miscounted the lines:  there are 12 lines of errors in 26 lines, for an "error rate" of almost 50%.

It is interesting that he chose this particular section of the log file, which happens to show only one ballot ID number.  Supposedly Central Lake Township had 1222 ballot reverses out of 1491 ballots total, so he could have taken his excerpt from almost anywhere in the log file.

The lawsuit in Antrim County over the retail marijuana initiative that was either won by a single vote or lost with a tied vote, is ongoing.  I continue to assert that this lawsuit has the potential to change the world; it could and should blow the entire election fraud machine wide open.

EDITED TO ADD:  I've been told that the ballot number is actually the ballot design number, as in for a particular precinct, but I haven't seen a source for that.

Apparently not much happened around here after the verdicts were announced.  There were preparations made though in case things did start happening:  pictures here.

Last night was apparently somewhat lively again, despite a four-county (!) 7 pm (!) curfew, but not near where we are.

There has been a lot of helicopter activity.